Ants | Signs of Ants Infestation | Type of Ants in Singapore

It is very common to find ants in Singapore. They are related to bees and wasps although not all of them can fly. Some winged ants that are able to fly are called the reproductive. This is usually the future queens who will swarm in a large group. Their main objective is to find a male to mate and start new ants colonies. Very often, these swarmers are mistaken for termite swarmers and vice versa. It is important to know the difference between these two. One way to find out is by looking at the wings.

Termite swarmer has all four wings that are all identical in shape and size. Whereas the ant swarmers have two sets of wings that identical to each other.

They mate in the air and after which the male will die soon after. In fact, this is common for a lot male bug.

It’s easy to recognise them. Narrow waists, bulbous abdomens and elbowed antennae. They are always commonly mistaken for termite. Ant has three distinct body segments, head, thorax and abdomen while termite does not have. They are also different in colour. Most of them are black, brown, tan or reddish brown.

They go through 4 different stages from the eggs to larva, pupae and finally an adult. The larvae are white and legless and look like maggots. They will undergo repeated moulting as it grows. Eventually, a cocoon will cover the pupae during its metamorphose period to an adult. The complete process may take from 6 weeks to 2 months. They can live for about 90 days although depending on the species, though for some can go for as long as 6 months to a year.

The queen can control the sex of her offspring by choosing to fertilise the eggs with sperm. All fertilise eggs and pupae that are well-nurtured, can become the next queen. Fertilised eggs always produce females while unfertilised eggs produce males. The workers ants which will make out entirely of female. The larvae are completely dependent on the workers for their care. The workers feed the larvae with regurgitated food.

They have one of the most diverse diets. Ants feed on almost anything. But, some prefer protein-based food while others more on carb based food. Most of them have a fondness for sweet things. They have a central ingredient in their diet called honeydew. Honeydew is a sweet and sticky secretion produce by aphids.

They are social insects, which means they live in large colonies or groups. Depending on the species, the colonies can consist of millions of ants. There are three kinds of groups in a colony: The queen, the female workers, and males. The queen and the males have wings, while the workers don’t have wings. The queen is the only one that can lay eggs. The male ant’s job is to mate with future queen ants and they do not live very long afterwards. Once the queen grows to adulthood, she spends the rest of her life laying eggs! Depending on the species, a colony may have one queen or many queens.

The workers tend to the colony’s offspring. Even rescuing the pupae should the nest be disturbed. They are selfless and will even sacrifice their own food for the well being of the colony. Their colony divide labour between workers, queen and male reproductives. The all-female workforce will gather food, constructs the nest and keeps the colony clean.

The colonies also have soldiers that protect the queen, defend the colony, gather or kill food, and attack enemy colonies in search for food and nesting space. If they defeat another colony, they take away eggs of the defeated colony. When the eggs hatch, the new ants become the “slave” ants for the colony. Do you know that Ants are actually termite natural predators?

They live underground, in dead wood or sometimes in plant cavities. In Singapore however, common ants can easily be found in an apartment. It will start by infesting your kitchen and bathroom. The kitchen, for obvious reason, as it is where the main food source can be found. They will look for crack and crevices and wall voids to start a sub nest. Don’t be surprised if they are many sub nests in your kitchen! The parent colony though can sometimes be found outside the house. Their nest look like a pile of soil. It is called an anthill. It is normally on the ground and a clear indication that the queen is nearby.

Type of ants in Singapore

Ants can be found throughout the world. From pavement ants that are commonly found in the northern states of America to the fire ant Solenopsis invicta that is native to South America. There are more than 10,000 species. In Singapore, you will come across these common type of ants 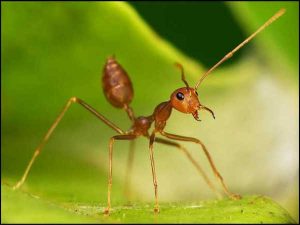 Also commonly known as green ants are usually found outdoors. They live on trees and can be seen building nest on leaves pull together. 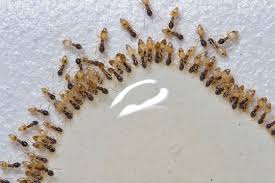 One of the most common ants that can be found in your home. They feed on a wide variety of food and can be seen foraying anywhere in the house. They prefer carbohydrates based food. Ant bait normally works to control the infestation. 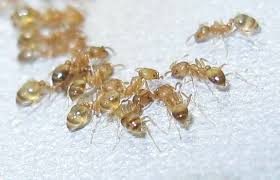 Different in colour but often mistaken for ghost ants. Can be found in the home as well. One way is to notice how slow they move compared to the ghost ant. They are harder to eliminate as most baits do work well with them. Prefer protein based food. They are nocturnal too. This makes it harder to determine how big their colony is. 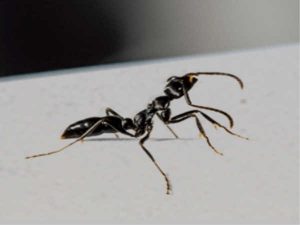 They have one of the best defensive technique. Usually will scatter around when threatened. Love sugary food. 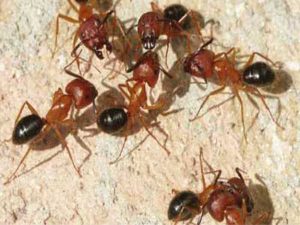 Often seen around the wooden area in the house. They are often mistaken for eating wood. What they actually do is burrow into wood to make a nest. Carpenter ant infestation grow very fast and they often move to accommodate the colony. It is not common to see them carrying the eggs during this movement.

They can enter your home in various ways. From outdoor or brought in. They can look so harmless. You see them crawling around and think nothing much of it. However, before you know it, there are everywhere. Most times, people only take notice of them once it is too late. Try leaving an unattended food on the table for 5 mins and you see them start feeding on it. When this happens, you know that you have a serious pest issue on hand. The kitchen is where it is most common to find them as that is the where the food source is abundant for them. However, the moment you start seeing them in the rooms, we can safely determine that the colony is getting bigger and that more sub nest need to be built to accommodate the infestation.

You start seeing large number of live ants. Leaving an unattended food is not possible anymore.

Indoor, you can find them living in any crack or crevices while outdoor, they can be found in a small pile of soil or damaged wood. A common nest found outdoor would be a fire ant nest.

Not all will bite but when they do, they can cause an allergic reaction. The fire ants sting is one of the most common bites that you can encounter. They will also attack in groups.